Today I would like to share with you an Author Spotlight on one of my favourite authors Beatrix Potter. Although the books are children’s storybooks I still love to read them myself and look at all the amazing illustrations.

The beautiful drawings and animal characters take me straight back to my childhood and the stories are pure escapism and have stood the test of time.

The name of Beatrix Potter is well known by many. However, Beatrix had an extremely interesting life, especially at a time when women were not encouraged to be ambitious. As well as being an accomplished writer and illustrator, she also worked as a farmer and studied mycology.

I grew up loving the stories of Beatrix Potter and I had many of the little hardback books which have been around for decades. My grandparents were always happy to read me stories of Peter Rabbit and his little friends. However, there is much more to this lady who was born over 150 years ago.

When I began to work in the Royal Doulton shop in Stoke on Trent I loved to collect the Beatrix Potter figurines. These were made by Beswick and Royal Albert, who were sister companies of Royal Doulton. 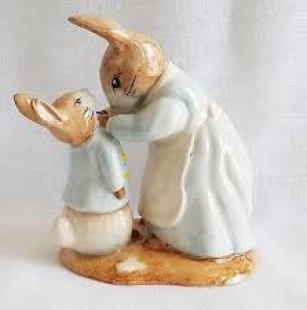 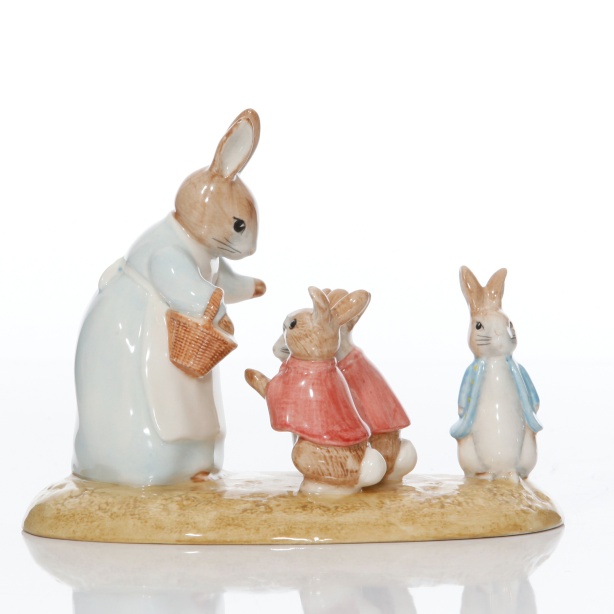 Beatrix Potter was born into a wealthy household in West Brompton, London, and was educated by a governess. Apart from younger brother Walter, she was a solitary child who loved her pets. She spent her time drawing wildlife and landscape portraits of Scotland and the Lake District where the family spent their holidays.

She kept a menagerie of pets including rabbits, hedgehogs, frogs, and mice which she sketched and made into little stories. One of her rabbits was called Benjamin Bouncer, she took him everywhere with her on a leash and taught him tricks to perform.

Here is a sketch of sleeping rabbits which was drawn by Beatrix Potter.

As a young girl, Beatrix kept a journal for many years, which was written in code. It took until 1958, long after her death, for the diaries to be translated.

When she wrote letters she always included a small sketch of a rabbit or mouse in the corner of the paper. She wrote often to the sick son of a former governess, Noel Moore, and told him the story of four little rabbits called Flopsy, Mopsy, Cottontail and Peter.

From these letters, the story of Peter Rabbit began.

In her twenties, she was a very keen mycologist and collected, painted and studied fungi. Her work was ignored by the anti-feminist scientists of the time, but her studies and theories were later found to be true and her illustrations are displayed in galleries in Scotland and still studied today.

When she was in her thirties Beatrix wrote and self-published the Tale of Peter Rabbit. She had been rejected by so many publishers that she decided to pay to have 250 copies printed to give to her friends and family. Frederick Warne and Co. took an interest when the books became popular but insisted that the illustrations were recreated in colour. He was one of the publishers who had previously rejected her work. The book sold 20,000 copies in its first year.

Beatrix had a short unofficial engagement to her editor, Norman Warne. Unfortunately, he died in 1905 just a month after the couple became engaged.

As early as 1903 Beatrix understood the complexities of merchandising and designed a Peter Rabbit Doll which she patented.

In 1913 at the age of forty-seven, Beatrix Potter married a solicitor and farmer called William Heelis. The marriage of thirty years was childless, but Beatrix helped in the education of several young nieces. The couple lived together at Castle Cottage until she died in 1943.

Her writing career only took up a small part of her life and after marrying she settled into the life of a farmer and conservationist. It is thought that her poor eyesight was the reason for the end of her writing career

Beatrix gained a reputation as a sheep farmer especially in the breeding and raising of Herdwick sheep, an indigenous fell breed. She bought a sheep farm called Troutbeck Park Farm where she raised her award-winning Herdwick herd and became the first woman president of the Herdwick Sheep Breeders Association in 1943. Unfortunately, she died the same year.

She was a hands-on farmer and not adverse to helping with haymaking or searching for lost sheep on the fells. In total, she came to own fifteen farms covering 4000 acres.

When she died aged seventy-seven she left all her property to the National Trust. This money enabled the preservation of the land which is now known as the Lake District National Park. The Trust opened her house, Hill Top Farm, to the public in 1946.

An unpublished manuscript was found in 2015 and has been published with the title The Tale of Kitty-in-Boots.

I watched the film of Beatrix Potters’s life which came out in 2006. It was simply called Miss Potter and she was played by Renee Zellweger.

A well as the Miss Potter film, in 2018 Peter Rabbit himself was brought to the big screen. It is a mixture of animation and live acting, with the main character of Peter Rabbit narrated by James Corden.

Here is the trailer to the Peter Rabbit movie

Her books remain just as popular today selling more than two million copies worldwide each year. In total, over 100 million books have been sold in 35 different languages.

Here is a list of the books in the Tales of Peter Rabbit series. (source Wikipedia)

This is a straw sculpture of Peter Rabbit that I visited recently at Snugburys ice cream dairy farm near to Nantwich, Cheshire.  The owners of Snugburys have a sculpture made in the field opposite the ice cream shop. In 2016 Peter Rabbit was erected to mark Beatrix Potter’s 150 year anniversary.

Sadly the sculpture was burnt down by arsonists. In 2017 Peter was rebuilt with the support of the local community and here is a photograph taken of him in April 2019. You can’t tell by the picture but he is 38 foot tall with 10-foot ears and a 10-foot carrot.

His blue coat is made from recyled bags that the supplies arrive packaged in. It takes 1000 man hours to make! Peter has helped to raise money for The Children’s Adventure Farm Trust and is designed by Mike Harper, Director of Harbook Engineering. People flock for miles for Snugbury’s ice cream, it really is amazing.

Here Are Some Beatrix Potter Books and Gifts Available from Amazon.

They make lovely christening gifts and look beautiful on display in a child’s bedroom.

*These are affiliate links.

Do you have childhood memories of much-loved authors, books, or characters?